Back in the Saddle With an ODBD Challenge Submission

It has been over three months since my last post and almost that long since I have been able to sit down and create something worth posting.  During the past 3 months we have changed addresses, I have taken on extra responsibilities at work, and our teenage daughter has flipped out and become a total stranger to us (said with tongue in cheek.)  Thus, the mojo has been literally non-existent and it is time to get back in the saddle and doing what I love: making cards for Operation Write Home to send to our troops.

Yesterday I put out a plea on Facebook for some encouragement and suggestions on how to get started and received some great advice that I was able to capitalize upon.  Sandy suggested that I get out something that I had been hoarding to use and Yolanda suggested that I then post it on the November ODBD challenge (which will help pay to ship some cards for OWH)  Here is what I came up with: 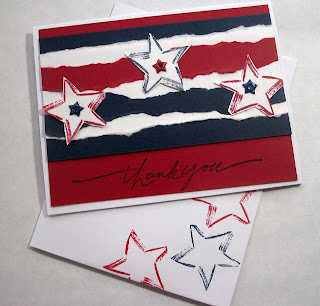 So, what was I hoarding that I had to dust off?  Everything but the card base and the envelope!  Let me explain.  Over a year ago my BFF hosted a card making event with her Sunday School Class and I was the fortunate recipient of the "not quite good enough" cards.  Well, if they weren't good enough for them they certainly were not good enough for our troops so I set them aside for triage and totally forgot about them until I was packing up for our move. What you see is actually two separate cards broken down, trimmed up, and combined for one unified product.  The stripped piece with the stars was all together and the red card stock was the base for a totally separate card that pretty much fell apart on it's own.﻿ 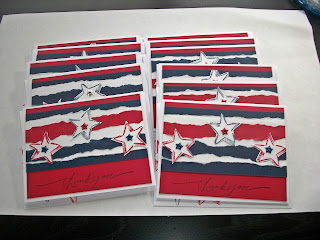 I was able to finish up with 11 new cards that are definitely "good enough" for our troops.  I also took a few minutes to stamp red and blue stars on the envelopes as an added touch.
Thank you OWH Facebook family for helping me out of the drought!  I won't be taking such a long hiatus ever again if I can help it!
Blessings and Happy Stamping,

ODBDODBD
Posted by Lisa Oliver at 10:09 AM

Lisa Oliver
Davison, Michigan, United States
I am a wife of 27 years and a mother of 3 awesome kids (ages 23, 18, and 16) I am a follower of Jesus Christ and use my skills for His glory. I work full time for Genesee Christian School (Accountant Extraordinaire) the school from which I graduated in 1985. My current stamping passion is for Operation Write Home and thus the title of my blog "Stamping with a Mission."

Snippets from The Word

Add Snippets to your site 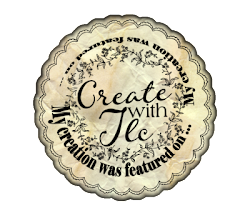